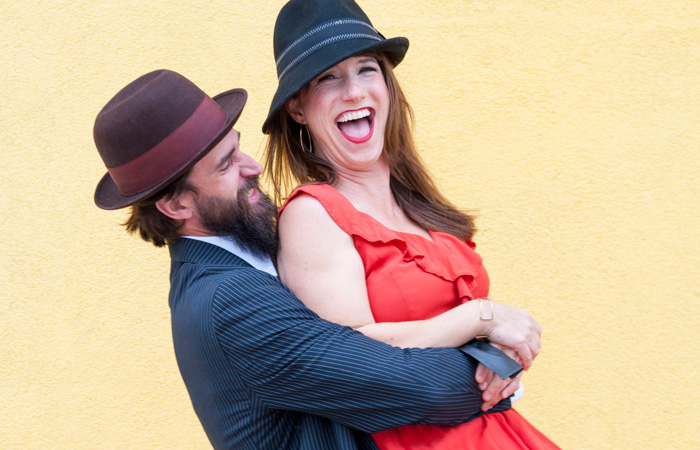 Over the last few years, it’s been my privilege to build relationships with a variety of talented musicians. These personal connections have afforded me the opportunity to see how passionate these folks are about their art. They have given me a glimpse of the struggle so many of them face as they share their creations, sometimes in a dingy bar full of drunk “listeners.” I’ve felt the tension, to a very small extent, that they feel when it comes to figuring out how to pursue this passion, this dream, while making ends meet and managing their personal realities and relationships.

A short while ago, I stumbled upon the music of a duo called “Alright Alright” when I downloaded some of their music from Noisetrade. The Denver based band consists of husband and wife, Seth and China Kent. I reached out to them asking if they’d be interested in an interview, not really aware of much of their story. During our email interactions, China mentioned that Seth was just turning 40 years old. And when I started hearing more of their story, I gained a new appreciation for how complex and difficult it can be for musicians attempting to make a living, manage their household, raise kids, make their music, and still love each other at the end of the day. The Kents generously shared about their lives and their art, and through the process, also gained an admirer. Below is our conversation…

TS: How long have you been married? How many kids (ages)?

AA: We’ve been married 13 years and have two kids, Fender and Harper, 10 and 8, respectively.

TS: When did Alright Alright become a thing?

CHINA: We started playing together before we were married, and that was in 2004, but we didn’t actually start our band together until after we had our son, Fender, in 2006. Our first show was April 12, 2007. However, we are on what we call “Alright Alright 3.0” because we have started and quit a few times along the way. This version of the band started after the Spring of 2013, when I (endured) a few serious health issue. There is nothing like having a cancer scare to make you get serious about fulfilling your life goals… I realized that making and playing music was truly my calling, my vocation, and my passion. I’ll let Seth tell about how he got involved again, at my bequest…

SETH: Picking up where China left off there. I had worked for a few years as a tech/studio guy in music but had had a rough go of it and in the spring of 2010 (if I recall) lost my job suddenly. I was burnt out and bitter and after a family road trip I decided to just get a job and work and not think about music much. I (After a few years), I was looking for another direction professionally and my job (contract work) was coming to an end. China was about to go on a trip and right before she left she basically said, “I am going to do music. I know we have tried this before and I know you got hurt by the music industry, but I want to do it with you. So, think about it.” I thought about it and when she got back after a couple weeks I said, “Yeah, let’s do this.”

TS: Could you talk about the dynamics of being parents and being a band? How do you find balance?

SETH: The two are not mutually exclusive, but neither one simplifies the other at all. Our kids are good with people and are super flexible. They also generally love road trips. If this were not the case I know the past few years would have looked different. I think for us the hardest part is how to know when to do the “normal family” thing and when not to. I had to take our son out of baseball one year because we were going to go on tour and I knew it would overlap with the season. We have to think about school if we have tours during the school year. There are a lot of additional moving parts that would be vastly simplified if we just did our thing. But I also think we would not be nearly as happy doing this if the kids were not a part of it. They bring a lot of joy as well as gut checks to the process. They will ask us about lyrics, critique our performance and tell us if they think parts of our show lose people’s interest. All of this to say, the finding of balance is a constant adjustment, we don’t just relax into feeling like we have it covered.

CHINA:  Incorporating our kids into everything we do has been easy on some level, because we are a very close-knit family.  Two years ago, we put the whole experiment to the test and went on a three-week house show tour. At the end of the three weeks, Harper, our daughter (then 6) turned to me and said, “Mama, thank you for going on tour.” I felt like I had won the lottery. It was magical. However, this past summer was more difficult.  Kids have different needs as they grow, and the social need has begun to show itself. Fender was not keen on being on the road this past summer, and that was hard for all of us.  As a mom, you want your kids to be happy, and you want the best for them, and yet as an artist, I want this fledgling career to start to fly. It is a hard tension to carry. About a week into the tour, both kids began loving the things we were doing, and we successfully “flipped” them using several incentives (they get paid every time they help set up or tear down, and we try to see and do as many fun tourist activities as possible).

I will say that having children has had the opposite effect on me than most other musician parents that I know. Most people had a career before kids and the kids have inserted themselves into something that already existed. I was a collaborator and co-creator in several other artists’ projects before I had children, but I lacked the self-confidence and grit to take on and hold my own music career. Somehow in the birthing and raising of my children, I got to an internal place of quiet confidence and intuitive determination that has allowed me to take up and carry this music career in a way I never could before children. They have formed me and I do not resent them one bit for the added challenge of managing the family and music pieces of our lives, but am continually grateful for them and their influence on me and my music.

TS: What is your dream for Alright Alright?

CHINA:  I think my overarching dream for Alright Alright is to share love and goodness through our story set to music. We write a lot about ourselves, though at the time we’re writing we often do not realize it. I also have a dream to build a sort of community and a sense of belonging that is related to our music and our shows. I have a vision for an emotional atmosphere, a kind of unburdening and a sigh of relief for our listeners. I am also eager to collaborate in an inter-disciplinary way.  I would simply love to write for a dance company or the theater.  I love to experiment with new ways of performing and new ways of collaborating.

SETH: When I am really honest, I think I want to be known as a decent song writer. I am very proud of what we have been able to do with the band so far from a quality standpoint and want to push that further. We made some conscious decisions to release things we could feel proud of and that would sound to other people like we cared. That is often harder than people may think. It takes a level of humility too, to admit that we can’t always make something what it needs to be on our own. But I think I want our material to be known as something of quality with a story worth hearing.

As I have considered the Kents’ responses to my questions, I have found a deep resonance with them. After all, I’m a 46-year-old amateur writer with stories to tell. I think my stories are worth hearing as well and am continually trying to grow in the quality of my writing. All the while, I have my lovely wife at home with me, a beautiful 8-year-old pain in the rear kid, and a full-time job. No, I don’t aspire to make a career out of my blog, but there’s something about Alright Alright’s path that hits home for me. Trying to create something honest and meaningful while wrestling through the rigors of family life… And yet, they seem to do it with grace and humility, leaning into the tensions rather than letting those tensions rip them apart.

While I enjoy the music I’ve heard from China and Seth, I find that I’ve enjoyed hearing about their journey just as much. Real people with real world issues trying to influence that real world with their art. It’s beautiful, really.