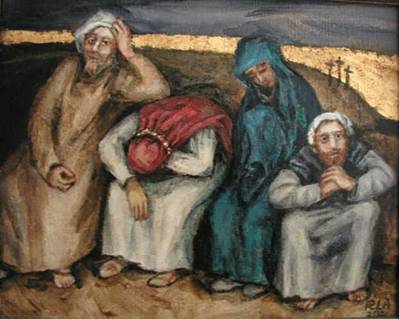 Silent Saturday. Jesus is dead. His broken and mangled corpse has been removed from the cross, wrapped up in burial clothes, and sealed up in a cave. There will be no miraculous healing today. No poignant teaching. No confrontations with the religious elite. No, today marks the time in which the world experienced life without Jesus. And for the first time in three years, his closest friends and followers experienced life without Jesus.

Perhaps they had faint memories of him saying something about coming back from the dead. But it seems as if such memories faded in light of what they’d just seen at Golgotha. Jesus, the One to whom they had pinned their hopes, the One to whom they had committed their very lives, who they believed was the Son of God, was dead. Like any other human being subjected to the treatment of the cross, he died. He was gone. It would seem their hope had been extinguished.

The grief must have been overwhelming. Perhaps they felt lost. Destitute. Left wondering how things were allowed to happen the way they did. Again, they likely remembered Jesus’ multiple predictions regarding his suffering and death. But hearing him talk about it and then seeing it or knowing it actually happened is another thing entirely. Now that Jesus has actually been humiliated, tortured, and executed like a common criminal, their worlds have been turned upside down.

Some of them likely were feeling grieved not only by Jesus’ death, but by how they had abandoned him as he faced into the ordeal from the previous day. When the temple guards came to arrest Jesus in Gethsemane, his closest followers ran away. He was left alone and walked through the rest of the events of Thursday night and Friday by himself, isolated from everyone who cared about him. One of his inner circle, Peter, had even verbally denied he knew Jesus at all, not once but three times. And the whole ordeal was initiated by the betrayal of one of his friends. As the disciples sat there on that silent Saturday, maybe they were thinking about how incredibly unjust it was that he willingly endured the shame and pain of the cross for them, in the wake of their infidelity to him.

In hindsight, knowing how this story ends, those of us who know Jesus know that his death and burial is not the finale. We know the cliché: “Sunday’s coming.” We have the great benefit of knowing that Jesus would rise from the dead on Easter Sunday. But, his first disciples did not have that luxury. They were left in the tension of their grief, the knowledge of their own unfaithfulness to Jesus, and, if they were even thinking about the possibility of resurrection, wondering if it could actually happen. In their minds, there had to be great doubt. And so, on that silent Saturday, they were left to their grief and attempts to muster enough faith to believe that it wasn’t all over.

You and I know it wasn’t over. Jesus’ story was still being written. So, we don’t have to sit in that tension today. However, we still have the opportunity to consider the injustice of the event we remember on Good Friday. Jesus, blameless and perfect, took on the humiliation and punishment that was on the docket for me… and for you. He set his will toward suffering the shame, pain, and separation from God that I deserved… that you deserved. Despite our vast infidelity to him, his faithful love drove him to suffer and die to make a way for us to know God.

So, perhaps before we quickly jump into the celebration of Easter Sunday, let’s take a moment to reflect again on the injustice of the cross and what it really means for you and me. Let us consider the great love of Jesus that moved him to suffer and die for unfaithful you and unfaithful me. Let us reflect upon the unfathomable mercy of God on full display as Jesus died on that Roman cross and was laid to rest. Indeed, worthy is the Lamb.